WE KNOW CELLS, AND YOU HAVE QUESTIONS! 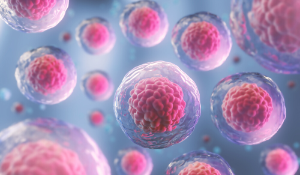 Here is everything you ever wanted to know about cells.

What is a cell and why are they important?

Our bodies are made up of trillions of cell who all work together to keep us alive.   Cells are the basic building blocks of all living things - including humans - and each cell eventually becomes a cell with a very specific function in our body.  Once their function is fully developed these cells are often referred to as differentiated cells since each is different and has a very different function. Just like our bodies, our cells age too and as the process of aging takes hold, our cells regenerate less and less and die off.

What is a stem cell, and how is it different than a regular cell?

A stem cell is like a master cell of the human body - before the cell has differentiated into a serving a specific bodily function it starts out as a stem cell.  A stem cell grows out into any kind of differentiated cell type and gets assigned a specific function for the body such as an organ. Stem cells start out undifferentiated or “pluripotent” since they have  that ability to become whatever cell type the body needs to survive. We all have stem cells. An unborn baby’s umbilical cord is full of stem cells, our blood has stem cells and other cells and even our bone marrow has stem cells.  But stem cells also exist in other places in the body. What makes stem cells so valuable is that they can grow out and serve any part of the body, replenish other dying cells, repair the body or replenish what it needs. For this reason,  stem cells have already been used for many years as a way to regenerate and repair the human body.

Are stem cells the only kind of cell that can regenerate in a human body?

Yes and no.  While technically the stem cell is the only master cell and for centuries medicine had been limited to that common understanding, in 2012, Shinya Yamanaka and Sir John Gurdon were awarded a Nobel Prize for demonstrating a technique than converts any regular human adult cell into pluripotent stem cells.  That meant that any cell in the human body that had been differentiated into a very specific function, could now be reprogrammed or converted into a stem-like undifferentiated cell. These new form of cells were called Induced Pluripotent Stem Cells or IPS cells or iPSCs because they are a type of pluripotent stem cell that can be generated directly from an adult regular cell.

I thought stem cells were only in a newborn’s umbilical cord, in bone marrow or in blood?

The discovery of iPSC technology was one of the most significant medical innovations in our lifetime because it has meant that humans were no longer tied to finding stem cells through highly invasive methods such as blood draws, liposuction, bone marrow extractions or umbilical cord harvesting - but over the lifetime of a human have the ability to leverage any cell in the body and convert it into a stem-like cell that can be used to treat disease, repair and regenerate organs.  This discovery has allowed medicine to rapidly advance innovations in using cells as a much more accessible and affordable source of personalized therapeutic medicine.

Why should my cells be collected and preserved at all - if my body regenerates them why can’t I just extract them when I need them?

Much the way we all age, our cells age too.Over time,they experience irreversible damage that causes them to be less useful, or viable as we age.  Unfortunately medicine has seen that sadly, when we need our cells most in life - later as we age and accumulate disease and organ failure - it is then when our cells are the least viable for cell therapy use.  Freezing them at the earliest possible moment in your lifetime will ensure you are preserving the best possible version of your cells rather than depending on aging cells. Our cells age as we age so freezing the clock on their age gives you the best possible chance that they can be leveraged later in life when you need them most.